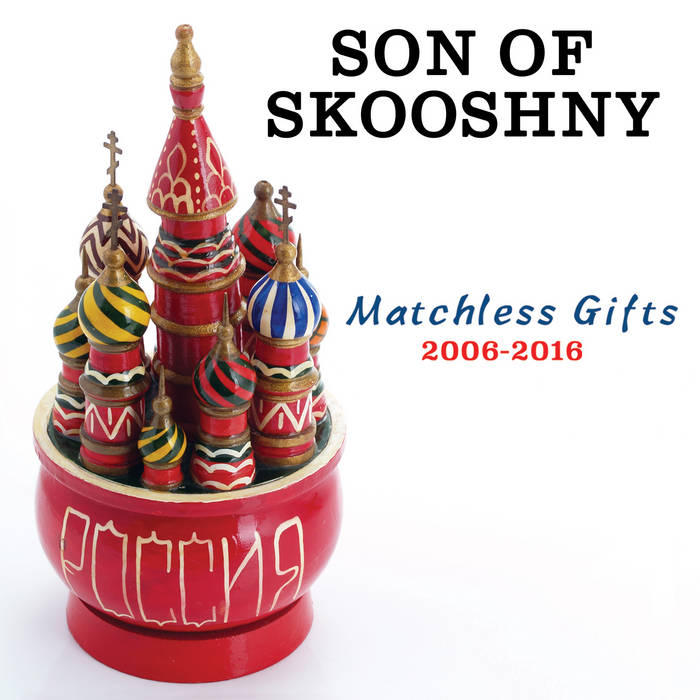 KOOL KAT MUSIK PRESENTS A DECADE'S WORTH OF SON OF SKOOSHNY RECORDINGS ON CD: shop.koolkatmusik.com/mm5/merchant.mvc?Screen=PROD&Store_Code=KKM&Product_Code=Son_Of_Skooshny&Category_Code=

In his teens, Mark interviewed Ray Davies of the Kinks and Marc Bolan of T. Rex for legendary Crawdaddy magazine.

In the 90s, The Sunday Times of London called an album by his former band Skooshny "an irresistible era-defying classic."

Matchless Gifts by Son of Skooshny has received the following attention:

"A Long-Overdue Retrospective From the Greatest Songwriter You Might Not Know."
"For those new to the Breyer songbook, this is as good a way as any to get to know one of the greatest songwriters alive, and it’s one of the best albums of 2017." "...brilliant lyrics..." "...the songs are catchy beyond belief..." "This guy is a real individualist, a first-ballot Hall of Famer who might take you by surprise."
— New York Music Daily (USA)
Read the entire review here:
newyorkmusicdaily.wordpress.com/2017/11/27/anothersos/

"While I don’t often review 'greatest hits' packages, I will make an exception for the underappreciated Son of Skooshny." "What sets this band apart from the rest is the modest approach and handcrafted jangle stylings to roots rock that compares well with Tom Petty, REM and Wilco’s Jeff Tweedy..." "...you’d be hard pressed to find a wasted note here. Highly Recommended."
— Power Popaholic (USA)
Read the entire review here:
www.powerpopaholic.com/2017/06/king-washington-and-son-of-skooshny.html

"Their modus operandi is smooth, layered guitar jangle—somewhere between the Byrds and early R.E.M.—with Breyer’s often inscrutable lyrics the tasty cherry on top." "...pretty much every song here marries his thoughtfully oddball lyrics to melodies that will get their hooks in you with relative ease." "Matchless Gifts is a 'best of' collection, and a quite stunning one at that. I’m not sure where Son of Skooshny has been all my life, but I’m sure glad they’re here now. Grade: A"
— Goldmine/Power Pop Plus (USA)
Read the entire review here:
www.goldminemag.com/blogs/power-pop-plus-kool-kat-musik-label-spotlight

“Son of Skooshny retrospective is diverse, fascinating, and innovative.”
“…a really comprehensive retrospective spanning a decade of great music.” “In spite of the act’s keen ear for sonic experimentation, there is also a pop element in Son of Skooshny’s music, making for a unique and forward-thinking attitude while still retaining broad appeal. This is definitely a great way to get acquainted with this group and to learn more about Son of Skooshny’s diverse career.”
— No Depression (USA)
Read the entire review here:
www.nodepression.com/album-reviews/son-of-skooshny-retrospective-is-diverse-fascinating-and-innovative/

Many thanks to Pop That Goes Crunch radio for all the airplay! Much appreciated!

The following has been said of Son of Skooshny releases over the years:

"Another Hauntingly Lyrical, Richly Jangly Masterpiece from Son of Skooshny"
"Breyer has soldiered on as Son of Skooshny. And his songwriting, always packed with clever puns, multiple levels of meaning and an incessant angst, has never been better...." "Half of the World is Breyer at his sardonic, metaphorically-loaded best...this lushly swaying 70s folk-pop gem...." "As good as these tracks are, they pale next to The Subtle Eye. It’s one of the best songs to come over the transom here in the past few years...." "Watch for this on the best albums of 2016 page if we get that far."
— New York Music Daily (USA)
Read the entire review here:
newyorkmusicdaily.wordpress.com/2016/05/29/sonofskooshny/

"...the music sparkles with class, bright jangling psych-pop..." "...the requisite jangle weaving its way through the melancholy song beautifully." "Quite simply magnificent, 'Cloud Cover' demands attention, cloaking you in sweetness, the words and music in total harmony, a feeling of lightness lifting the song delightfully." "...the whole EP rounded off with the essential sound of 'The Subtle Eye', which is just a classic tune that lodges itself in your head compelling you to play it again. Another triumphant collection of tunes from Mark Breyer, go get one."
— The Terrascope (UK)
Read the entire review here:
www.terrascope.co.uk/Reviews/Rumbles_March_17.htm

"Son of Skooshny is Skooshny frontman Mark Breyer with Steve Refling. The band has slowly built up its collection of singles into a EP for you to enjoy. Fans of Tom Petty and The Traveling Wilburys will love this music. Get it on Bandcamp or Amazon."
— Power Popaholic (USA)
www.powerpopaholic.com/2016/11/ep-reviews-1957-tail-fin-fiasco-the-roaring-juniors-cinema-star-and-son-of-skooshny.html

"...three of the songs making up the encounter were released as singles along the way but it is as part of Confection that they really blossom, each adding a magnetic aspect to its engaging whole" "...seducing ears and attention with its tangy melodies and gently nagging stride..." "Breyer’s expressive tones and suggestive melodies spread through the heart and body of the richly enticing encounter. As catchy as it is sultry..." "richer in the weave of flavours and seductive prowess it bears..." "with its alluring presence..." "tempting harmonies cuddle and melodies conjure..." "multi-layered landscape...draws the imagination deeper into its beauty" "deserving of greater attention."
— The RingMaster Review (UK)
Read the entire review here:
ringmasterreviewintroduces.wordpress.com/2016/12/13/son-of-skooshny-confection/

Many thanks to Power Popaholic for including Confection in its Best 10 EPs of 2016.
www.powerpopaholic.com/2016/12/the-best-power-pop-albums-of-2016.html

Much appreciation to the Ice Cream Man Power Pop and More! for including Son of Skooshny on Radio Show #170: Best of 2016, Part One.
icecreamman1967.blogspot.com/2016/12/ice-cream-man-power-pop-and-more-radio_31.html

Muchas gracias to Plastico Elastico Radio Show in Spain and beyond for recent airplay.
plasticoelastico.es/programas/las-multiples-variables-determinan-una-buena-cancion/

A big thank you to Eric Sorensen for the very kind mention in his JANGLE ON! feature on Pop Geek Heaven.
www.popgeekheaven.com/music-discovery/jangle-on-december-2

Many thanks to NOHOARTSDISTRICT.COM for its wonderful recent feature story on Son of Skooshny. Read it here:
www.nohoartsdistrict.com/noho-news/item/3516-noho-provided-the-backdrop-for-the-song-lyrics-no-ho

The following has been written about some of the individual tracks from Confection by Son of Skooshny:

"Son of Skooshny‘s two latest singles are both gems. Frontman/rhythm guitarist Mark Breyer may be revered in powerpop circles, but he should still be better known than he is. Check out Cloud Cover, a wistful, dreamily uneasy transcontinental flight scenario. And his latest release, Just a Test, is even better, a backbeat stomp that’s one of the funniest songs Breyer’s ever written…and then it gets dark. Multi-instrumentalist/producer Steve Refling turns in some of his finest work as a one-man version of the Church."
— New York Music Daily (USA)
newyorkmusicdaily.wordpress.com/2015/08/30/singles830/

"Next up a couple of recent singles from Son Of Skooshny (Mark Breyer), with 'Cloud Cover' being a beautiful and pastoral tune that recalls The Byrds in its jangle yet has a more contemporary feel and some gorgeous vocals that shine out throughout the song. Equally lovely, 'No Ho' has a similar shimmer, the jangle ever present as the song glides along, its bejewelled outer hiding a tale of regret that can be felt in its emotions and atmosphere."
— The Terrascope (UK)
www.terrascope.co.uk/Reviews/Rumbles_March_15.htm

"Powerpop maven Mark Breyer has been writing heartbreakingly beautiful songs for a long time, first with cult favorites Skooshny and most recently on his own, under the name Son of Skooshny. His latest one, No Ho – a collaboration with multi-instrumentalist/producer Steve Refling, streaming at Bandcamp – paints a gently devastating portrait of existential angst and understated despair, a couple doomed from the start traipsing their way through a vivid LA milieu. And the title could be as savage for the girl as the narrator’s prospects are bleak."
— New York Music Daily (USA)
newyorkmusicdaily.wordpress.com/2014/11/22/saturdaysingles

A big thanks to Charlie at Stereo Hysteria for his excellent interview with Mark, his November 2014 artist of the month. Listen here:
stereohysteria.podomatic.com/entry/2014-11-01T00_00_00-07_00

"Brilliantly Lyrical Janglerock from Son of Skooshny":
"Mark Breyer is one of the best underrated rock tunesmiths and lyricists of the past four decades." "...this guy is keeping the literate janglerock flame burning as strongly as any songwriter is these days." "...richly tuneful, jangly, anthemic, deviously lyrical rock." "Both lyrically and musically, this is a genuinely amazing album."
— New York Music Daily (USA)
Read the wonderful review here:
newyorkmusicdaily.wordpress.com/2014/03/03/sonof/

"Filled with glorious jangly pop tunes that will make you smile, 'Mid Cent Mod' is a five song album/EP from Son of Skooshny. Opening track 'Dizzy' says it all really, a heady mix of The Byrds, The Church and Green Pajamas, taking the best elements of those bands and distilling it down to perfection. As you can tell, I really like this set and none of the other tracks disappoint with 'Mid Century Modern' having a warm glow and a sixties vibe, 'Sorry' having a lyrical poignancy, 'Knee Deep' rocking up a bit and 'Untold History' rounding everything off far too soon, which is my only complaint about this fine, fine collection."
— The Terrascope (UK)
www.terrascope.co.uk/Reviews/Rumbles_October_13.htm

"...a damn fine example of roots oriented pop." "...a full rich sound." "...a touch of that SoCal sound that flows beautifully from one verse to another..." "Each tune tells a vivid story, the production is flawless and that’s about all you need here…." "Highly Recommended."
— Power Popaholic (USA)
www.powerpopaholic.com/2013/07/spider72-frinchers.html

"Emotive and evocative…fresh and pleasing….” “The melodies bred by the songwriting engage and at times bewitch around the infectious pop stroll…poetic hues.” “A tender and provocative wash of melodies and vocal harmonies embrace ears and thoughts...elegant sounds and enterprising textures...seduce and richly satisfy….” “deep melodic colour and an emotive potency that stirs thoughts and feelings....” “...strikingly composed and delivered….” “...magnetises ear and senses…ever compelling vocals....” “an outstanding encounter igniting the passions….” “sizzles on the ear whilst lyrics and their delivery spark further use of imagination….” “a rather tasty and exciting release…suggests even greater things are ahead from the LA hailing
Son of Skooshny.” “8/10"
— The RingMaster Review (UK)
ringmasterreviewintroduces.wordpress.com/2013/08/21/son-of-skooshny-mid-cent-mod/

Many thanks to these reviewers as well as to Plastico Elastico Radio Show in Spain and beyond; Hotel Arizona on Radio Enlace in Spain and beyond; Radio Free Americana in the USA and beyond; The Music Enthusiast podcast in the USA and beyond; and all the others for the reviews, airplay, videos, mentions, and support! Please support them as well!
www.minuszerorecords.com/skooshny.html
www.plasticoelastico.es
www.radiofreeamericana.com/chart.htm
records1001.wordpress.com/2013/07/31/julio-2013-july-2013/
hotelarizonaradioenlace.blogspot.com
oscarkotj.blogspot.com
www.spreaker.com/user/.../the_ringmaster_review_23_1
gopodcastyourself.com/music-enthusiast-podcast-78-make-gold-spin/

“Skooshny...specialised in quirky, intelligent power pop with razor-sharp lyrics, complex song structures and big fat rounded guitars. Fast forward to 2010...[Mark] Breyer has teamed up with several long-time collaborators to bring us Son of Skooshny.... If memorably hook-filled songs are your bag, then you need to get your fill of this!” — The Terrascope (UK)
www.terrascope.co.uk/Reviews/Reviews_November_11.htm

“Skooshny made swirling psychedelic pop music with the most distinctive of lead vocals. Now the man responsible for singing and writing most of those songs, Mark Breyer, is back. His new venture is named Son Of Skooshny and the new album is Lovers Leap Of Faith. All the old magic is in place....” — Bucketfull of Brains (UK)
bucketfullofbrains.blogspot.com

"…a vibrant and pleasing collection of guitar pop and sixties teased/seventies spiced melodic rock songs.... All songs leave one enthused and bristling for much more.... Lovers Leap of Faith is a fine album that shows melodic pop does not have to be obvious, unoriginal, or sterile." — The RingMaster Review (UK)
ringmasterreviewintroduces.wordpress.com/2012/05/21/son-of-skooshny-lovers-leap-of-faith/

The following has been written over the years about what Skooshny was:

“Contrary to popular rock’n’roll belief, flash isn't everything. Case in point: It's quite conceivable that no band in rock’s hoary history was less flashy, more self-effacing than Skooshny. The name itself, widely disliked even by the band’s strongest supporters, is Russian for ‘boring.’

“This modest band, with its equally modest official recorded output, consistently produced music of rare quality: spectral harmonies, labyrinthine song structures, and playful, literate lyrics that transcended the low-budget productions to which they were constrained to resort.

Bandcamp Daily  your guide to the world of Bandcamp

Featured sounds from Fly Lo and Ahmed Idris, plus Mother Nature hops on to drop off new project